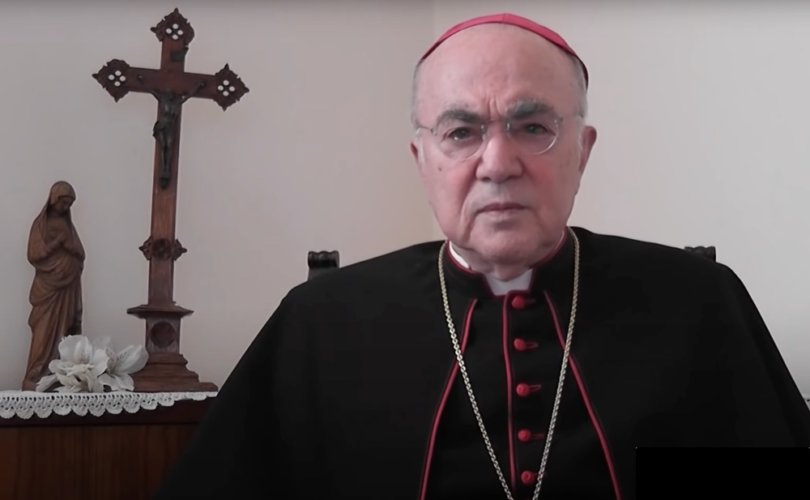 (LifeSiteNews) – An increasing number of Catholics are attacking Archbishop Carlo Mario Viganò for his analysis of the situation in Ukraine. Catholics I respect, and know, have accused His Excellency of being a “conspiracy theorist” pushing “Kremlin propaganda” and “carrying water for the KGB.”

The blowback Viganò is receiving deserves our attention, as does the way establishment traditionalists are talking about the Ukrainian conflict itself. We live in a significant moment in Church history. It would be a mistake almost beyond compare to cancel the archbishop at the exact time we need him most.

Firstly, let me say I believe Archbishop Viganò is the answer to decades of prayers and penance by Catholics who have begged God to send them a prelate who can see through the lies of the world and guide them through the fog that has enveloped the Church. In this regard, I view him as a sort of Old Testament prophet.

This isn’t to say he’s impeccable, for no human being is, but I can’t recall a single public statement His Excellency has made that doesn’t read like one of the great social encyclicals of the 19th century. Even his critics would be hard pressed to deny the gifts of the Holy Spirit are plainly visible in his writings. It seems to me God is giving him graces otherwise reserved for a pope.

What did Viganò actually say?

Far from being Russian “propaganda,” Viganò’s well researched summary of the Ukraine-Russia conflict is a balanced explanation of what’s going on in the region — and why it’s taking place. It’s less of an op-ed arguing for one side over the other and more of a 10,000-foot view of current geo-political realities. Few, if any, bishop statements I’ve read so far possess half the understanding of the situation as Viganò does.

It takes a decent amount of time to read through His Excellency’s analysis given its breadth and scope. I’ve done so twice now. Here, in perhaps a grossly overly simplified way, is what he said:

I do not see anything His Excellency has written that can be characterized as pro-Russian talking points or Kremlin “propaganda.” He’s charted a decidedly non-ideological course by taking into consideration a variety of factors.

In my estimation, his essay betrays a solid understanding not only of the behaviors (and corruption) of Ukrainian leaders — past and present — but also of the foreign and domestic policies pursued by Ukrainian lawmakers in recent years. He also has a sober grasp of the history and relationship between Europe, Ukraine, and Russia and how the current conflict fits into the larger goals of the Great Reset and the future plans of international elites.  https://static.lifeserver.net/9f545a60d8ba7a0947f0d833de910a82/index.html?clickTag=https%3A%2F%2Fservedby.lifeserver.net%2Fcl.php%3Fbannerid%3D90177%26zoneid%3D8552%26sig%3Df32fdf820509349e1d8999d9292a67437a845a0d98bc9fc09529ec60c8659500%26oadest%3Dhttps%253A%252F%252Fwww.lifesitenews.com%252Fnews%252Fpro-life-filmmaker-joins-forces-with-lifesitenews-to-help-save-ukrainian-moms-and-children%252F

If I’d been consulted by His Excellency on what to say in his statement before it went to print, I would’ve asked him to include some additional citations for a few of his claims, as well as to say something pastoral about Ukrainian Catholics and how he sympathizes with them and other innocent victims in this conflict. I would’ve also asked him to share more thoughts on the actions taken by Vladimir Putin. Perhaps he will do this in the future.

His Excellency’s statement has not been well-received by establishment traditional Catholic media outlets and public figures. I needn’t repeat what they’ve said in this space. Most of their comments can be found online. Broadly speaking, they amount to nothing more than vague accusations and uncharitable remarks that fail to put forth a cogent counterargument. The only substantive response I’ve seen so far is this interview with Fr. Jason Charron on Matt Fradd’s Pints with Aquinas podcast, and even he gets a few of the archbishop’s remarks wrong. Ultimately, the personal attacks and snide comments made about Archbishop Viganò reflect more poorly on those who make them than on the archbishop himself, whatever his personal failings.

One possible reason Catholics aren’t seeing this conflict for what it is is the influence of Deep State-owned corporate news networks. For decades, Western outlets have been repeating Cold War-era talking points and using terms like “oligarchs” and “propaganda” only when speaking about Russia. This has had the lamentable effect of blinding many Americans to the reality that the same terms could be used for powerful businessmen like Bill Gates and outlets like CNN, the BBC, and many others. Americans are, by and large, also unable to see just how many revolutions, social discord, and unjust wars the US has had its hand in over the last several decades all under the guise of spreading “freedom.” Too many Catholics think that only Russia is evil and the US is good, when in reality things are far more complicated than that.

President Trump, for his part, was able to see through the media’s lies. In a 2017 interview with Bill O’Reilly, Trump was asked how he could work with Putin, a man O’Reilly called “a killer.” Trump promptly responded, “There’s a lot of killers. What, you think our country’s so innocent?…take a look at what we’ve done….[there’s] a lot of killers around, believe me.” Is it not the case that Archbishop Viganò is in a certain sense saying the same thing but in regards to the Ukraine-Russia conflict? And, like President Trump, is he also not being vilified by his critics as a Putin supporter for doing so? — Article continues below Petition —

Another point worth mentioning is the way in which Viganò’s analysis tracks closely with the views taken by many mainstream conservative reporters. The Columbia Bugle, Pedro Gonzalez of Chronicles, Raheem Kassam of The National Pulse, and Jack Posobiec from Human Events have been providing invaluable coverage of the Ukraine-Russia conflict. They all deserve an award for revealing Western media corruption. They’ve also been instrumental in explaining how neo-conservatives, Deep State actors, and Great Reset leaders are pushing for war in Ukraine.

And yet, when Archbishop Viganò puts forth statements similar to theirs, Catholics call him a “conspiracy theorist.” I do wonder how some traditionalists reconcile their low appraisal of Archbishop Viganò with their adulation for, say, Leo XIII, a pope who wrote an entire encyclical in 1884 on how global Freemasonry is trying to ensnare the world to its diabolical ways. Would they have laughed him off and called him a “conspiracy theorist” if they had been alive back then? If not, what makes them say such things about the archbishop today? The Holy Spirit gives us the graces needed to see through the empire of lies built by the devil. If COVID has taught us anything, it’s that evil men are plotting the destruction of not only the Church but the world as a whole and that the term “conspiracy theory” really isn’t an effective smear anymore. Most of the time, it’s a conspiracy fact.

Catholics are of course more than free to disagree with Archbishop Viganò’s analysis, but if they do decide he’s wrong and go public with their views they should at least provide a substantive critique of his statement and not be so quick to casually throw him under the bus. They should also humbly pray to God about whether His Excellency has been sent specifically for this moment in order to get us to see through the many falsehoods around the world. I for one support Archbishop Viganò’s statement and await the day the worldwide Church does as well. 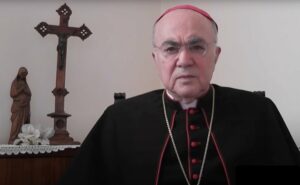 13 Aprile 2022
Abp. Viganò: Globalists have fomented war in Ukraine to establish the tyranny of the New World Order 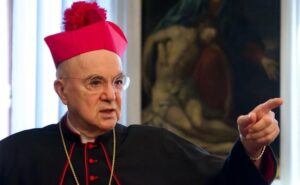 Abp. Viganò: Globalists have fomented war in Ukraine to establish the tyranny of the New World Order 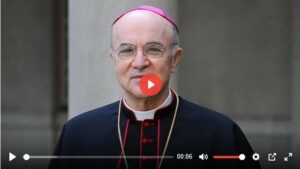